A Kayak for Jill 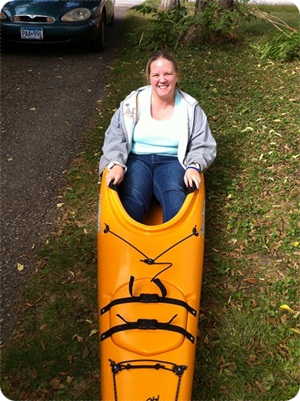 This summer Jill got a better idea of what kind of kayak she wanted.  She really liked mine, but wanted a bigger cockpit so she had more leg room.  Current Designs makes a kayak, exactly like mine, but with a bigger cockpit.  So basically Jill wanted the Kestrel 140 OC (Oversized Cockpit).  They are normally around $1000, so this seemed like it was going to be a long time away.

If you are not familiar with Current Designs, they are some of the best kayaks I have seen and are even made locally, in Winona, Minnesota.  Kind of a win / win situation, getting a good product from somewhere local.  Occasionally in the fall they have a warehouse sale, to clear out some of their inventory.  It is not very well published, but I think that is done to keep it smaller and more local.  Thanks to a couple of friends, I learned when the sale was this year.  So I took an afternoon off of work to go down there, but did not tell Jill I was going.  I only said I was headed to Winona in the afternoon, which for me is a very common thing I do for work sometimes.  When I got there it was very much like a Black Friday sale.  I had to park two blocks away, but when I entered into the sale there were kayaks everywhere.  I looked and sure enough found the Kestrel 140 OC kayak, that was even the same color as mine, for $450.  So I grabbed it, as that was perfect for Jill and exactly what she wanted.  So with the help of a friend who came to the sale with me, we loaded the kayak up on my truck and I brought it home.

When I got home Jill was out doing errands so I parked it in our driveway.  When Jill did get home she pulled into the driveway and was going to back out again as she figured I was going kayaking.  Looking at the kayak on the top of my truck, it looked just like mine.  I asked her to help me take it down and she was very confused and started arguing, “Why did you put it up there if you were just going to take it back down?”  It wasn’t until I opened our garage door and she saw that my kayak was still in the garage that she realized what was going on.

She was very excited and we went out and found a second car mount so we can haul two kayaks at the same time.  We’re hoping the weather holds so we can get out on the water on Sunday when we have time.