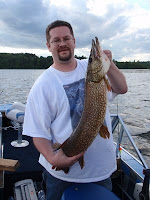 For the week before the 4th of July we went up to Tuck-A-Way Resort in Backus Minnesota on Lake Hattie for the week with Jill’s family. They have done this trip every year for several years now. We have had to expand to two different cabins as the family has expanded over the years too. So Jill’s parents, Jody, Tony, and Allison all stayed in one cabin while Trent, Jill, and I stayed in the other. We always take our dogs up there too because Alexis LOVES to play ball on the beach and go swimming in the water, she is such a lab. It is also very much a summer vacation for her too.

I believe it was the night of Sunday, June 28th that Jill, Trent, and I went out in the boat. Jill and Trent wanted to do some fishing for sunfish and I was itching to use some of my new lures for some northern fishing. Jill’s Dad, Walt, makes his own fishing lures, so for Christmas I always get some, and was anxious to try them out. Jill was fishing for sunfish on one end of the boat and I was fishing for northerns on the other. It was not long before I hooked a small one on a spinner lure. Trent netted it, it was nice, and we threw it back. Just a couple of casts later I had another strike, but this one was bigger. We got it into the boat and found it to be an 8.5lb northern, 32 1/4 inches long. At that point Trent switched to northern fishing a caught a few more, as did I, but not before the last norther broke the big spoon off of my new favorite lure. But we were able to take it back with us and Walt was able to fix it.

The fishing continued to be fairly good the rest of the week, going on and off. I went out again with Walt and between the two of us we caught and released about nine northerns, the largest being 3.4lbs. Again, more lures damaged, I think I will have to put in an order to Walt to make me some more of this spinner lures. I had so much fishing that I even called work and extended my vacation for the rest of the week as opposed to coming back early as I had originally planned.

The other factor was that we were able to upgrade our cabin into a much nicer, and bigger cabin than we had. There are new owners at the Tuck-A-Way resort and they are doing some really nice things with the resort. The new cabins are much more modern and a lot nicer then the older shacks that used to be there. They have also put in new docks and new stairs down to the docks and beach. They have however kept the nice, family feel of the resort. It feels a lot more like going to stay with your relatives than staying in a hotel or some other resort. Jill and I even sat in the lodge and talked to one of the family members, Karen DuChene, for quite some time. And I personally liked that kind of atmosphere. That and they have kept it pet friendly, which for me is another big draw for this resort. As this is not just a summer vacation for us, but also for the puppies. So all in all a great week, I truly got to relax and unplug with some fishing.