On April 28, 2011 Ubuntu 11.04 was released for download.  This release was majorly different than previous releases as they had changed the entire look and feel with the new Unity interface.  This new interface is very similar to the older netbook versions they had offered previously.  In fact they have merged their desktop and netbook version into one desktop Ubuntu version.  There is still a separate version of Ubuntu Server however.

I knew this interface was coming, and honestly I expected that I would not like it.  So I was relieved to hear that they made it easy to switch back to the older Gnome interface by changing your desktop interface on login.  But I thought I would give it a try, and honestly I have found that I like it a lot.  I had tried this before in their older Ubuntu Netbook Edition, but found the performance horrible.  The performance on 11.04 is not really an issue and runs just fine on my netbook.  So before we go on, let’s take a look at the new desktop so I can show you what I am talking about. 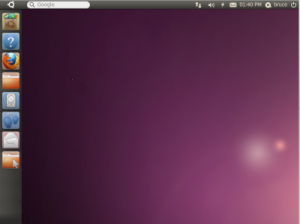 The biggest change of course in the launcher.  Unlike previous Gnome interfaces that were more windows like, this one has a launcher on the left side for your most used applications that you can bookmark there by choosing “Keep in Launcher”.  This launcher will also disappear when you set your applications to full screen.  This frees up a lot of real estate and makes it a lot more netbook friendly.  The top menu bar changes per the application, so that depending on which application you have open, the menu bar at the top will change when you move your mouse up there.

When you open applications they will appear on the launch, if they are not already there, and will have an arrow next to them indicating there is an open application.  If you have more than one of the same application open, this will show up as multiple dots.

Of course as this is Linux it also has one of my favorite features, multiple work spaces.  You can still have four work spaces going and move between them by changing the workspace, or by simply click on the icon on your launcher for the open application.

The other noticeable difference is the menus to applications are completely different.  This is replaced with more of a dashboard that you can access by clicking on the Ubuntu logo on the top left corner of the screen.  You can then do a search for your application to find the one you are looking for.  This makes it a little hard to find you applications as you have to know which one you are looking for, instead of just browsing for it.  However I have not found this too problematic and prefer the extra space it has opened up for my desktop.

So all in all I have been liking the new Unity interface, even though I expected I wouldn’t.  I find that it is more MAC-like than Windows-like such as Gnome.  But I have adapted well to it and am enjoying the extra free space on my desktop and for my applications.  Looking ahead I can definitely see the Unity interface being a big hit on a tablet device.  So if you are an Ubuntu user, give Unity a chance before you go back to Gnome.  I know I expected to dislike it, but have found it very user friendly and intuitive.