As I have been trying to update and organize my blog, I realized I have not talked to much about my dogs, which is kind of weird since they are like our kids. We have two dogs, Alexis and Flash. They are both black labs, and very spoiled. 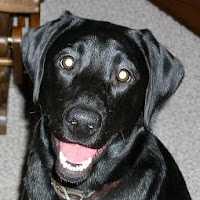 Alexis we brought home when she was only 6 weeks old, she has been with us all of her life. We got her from a friend’s cousin, who also took home her sister Treanna. My wife, Jill, had read a lot of books on puppies as we had been awaiting the day we could bring Alexis home since she was around two weeks old. Jill had all these rules in place for Alexis based on what she had read. When we went to bring Alexis home, she seemed like a mellow little puppy, she snuggled all the way home. As soon as we got home and set her down, off she went. She had no trouble adjusting to our home, she basically declared it as her own almost immediately. As for all the rules Jill set, the following months would find Alexis breaking each and every one. I stayed out of the way on those. My favorite was the rule to keep her off the furniture. Alexis got on the couch and Jill went to get her down and she just stared at Jill, so Jill said fine and walked away, with the rule now broken and Alexis allowed on the furniture. She was a terror as a puppy, we had her go through puppy classes and we did not know peace until we got Alexis hooked on BALL. Playing catch with tennis balls became her favorite, and today is still very much her obsession. She is still very high strung and is often to smart for her own good, trying to manipulate us to get what she wants. She is almost like having a kid. 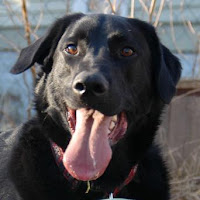 So about three years passed after we got Alexis, and our friend Clara was working at Paws and Claws Humane Society. She would often tease us about getting a second dog, and I didn’t really want to. So one day she talked to me into visiting the shelter and showed me the four month old Flash. I thought he was cute, and figured if Jill met him that it would be trouble. Shortly after Clara brought him by our house for a visit, and he immediately ran into Jill’s lap and snuggled, I knew we were in trouble then. Flash adored Alexis, but she wanted nothing to do with him, although he was very mellow and submissive to Alexis, so she tolerated him. Eventually it was time for Clara to take him back to the shelter, and she picked him up and took the toy out of his mouth and told him, “put the toy down Flash, it is time to go back to the cold, dark kennel”. We thought about adopting Flash and realized if we would ever be able to do a second dog with Alexis, it would be Flash or none. So we adopted him and brought him home. We put him through puppy classes like Alexis, and found he loved to play with other dogs. He was so much mellower than Alexis, the kind of dog that is just happy to be there. But I was worried because I was not sure how well they were getting along. One night they were outside for a while and it was too quiet, I went to look and found the two dogs playing and running around the yard. As soon as Alexis realized I was watching, that was it, she didn’t want anything to do with him. Evidently she did like Flash, but was trying to keep it a secret. Alexis is such a princess.

So those are the stories of how we got Flash and Alexis. They are two very different, but very good dogs. Both of them are like our kids and live a very spoiled lifestyle.