The Order of the Stick 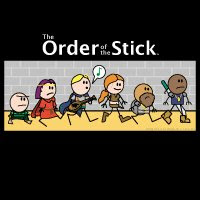 One thing I have been following every week without resolve is a cool web comic called The Order of the Stick. It is by Rich Burlew, and does a fairly decent job of poking fun at Dungeons & Dragons games. The story itself follows a band of merry adventurers who attempt to destroy their arch foe, a litch named Xykon, and how they deal with the Dungeons and Dragons mechanics and universe. It is highly funny and addictive. If you have ever played Dungeons & Dragons, you would more than likely enjoy this comic. I have read all the episodes online, and own all of their books. I also purchased their board game, which is pretty fun to play too, and has a lot of the comical fun of the web comic. So if you are into Dungeons and Dragons, I would highly recommend this comic for something fun.