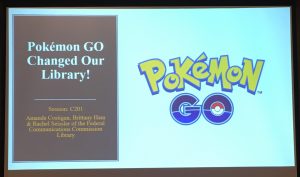 As someone who has used Pokemon GO and brainstormed with some of our libraries, I had to attend this session just for the fact they used Pokemon GO.  This presentation was done by the librarians at the Federal Communications Commission (FCC) Library.  And when they started they were very upfront that this presentation was not about Pokemon GO, but some great marketing strategies that came to be after it was launched.

What they found was that their library, like so many others, was a Pokestop.  So they immediately put together a display where patrons could write down some of the Pokemon that they had caught at the library.  But this was just the beginning for them as they started to put together a larger marketing campaign.

They also made some good points about boredom at work vs having some fun at work.

The Dangers of Boredom

The Benefits of Fun

They then discussed some of the methods they used, such as signage.  Making sure that the signs had a visual impact, created awareness, and had consistent graphic identity / branding.  They also noted that using a lot of negative works in your signage can turn patrons away.  Such as Don’t, or Can’t.  So keep that in mind when doing signage.  They also talked about making posters and using some great tools such as Canva, Easel.ly, Gimp, and Piktochart.

They also discussed doing some of the events in the library as well.  And had a very good point when it comes to events, “If you feed them, they will come”.  Meaning that people usually tend to show up for events where there is free food.

Passive Programming was another topic they touched on, these are things that patrons can do whenever they want and require minimal staff time or resources.  During this talk they did mention something that I thought was a very good idea, and that was putting Thank You memes in with returning ILL materials as a way of saying thank you to the sending library for lending them their materials.

All in all this was a great presentation, and I know many of our member libraries already have experience with some of these kinds of ideas and methods.  And while it did not have a lot to do specifically with Pokemon GO, it was good to know that it got them on the right track to do some more aggressive marketing.