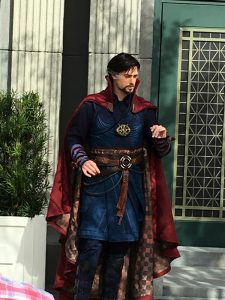 One of the things most of us do not realize that impacts our favorite parks is licensing. I had an experience with this on our last trip down in December 2016. Recently two movies came out that were pretty epic for me, Marvel’s Doctor Strange and of course Fantastic Beasts and Where To Find Them.

Normally when I hit Universal I find a lot of souveniers as I am a big Harry Potter fan. But I have a lot at this point so I was looking more for souveniers from Fantastic Beasts. Sadly none were to be found at Universal, and there was no mention of it anywhere in either of the Harry Potter parks. I did get to talk to one of the workers at Olivanders and asked about this. She too said she was impatiently waiting for Fantastic Beasts merchandise, but the licensing had not gone through yet to allow them to sell anything. So kind of disappointing for me, but not for my wallet.

One the other hand, we went to Hollywood Studios and had just gotten off of the Toy Story Mania ride and noticed a group of people standing at the end of a dead end street around the corner. We went to see what was going on and sure enough, there was Doctor Strange himself leading a group of kids teaching them spells. He did a very good job with some levitating spell effects and fog machine. All the kids, and even some of the adults seemed to enjoy it thuroughly.

This got me thinking, as both of these movies are really recent that kudos to Disney for hitting Doctor Strange while it is in the theaters. Of course this is no doubt to the fact that Disney is behind all of the Marvel movies, so of course licensing is not problem for them. But this did make me realize how much legal behind the scenes things need to happen in order to see Doctor Strange or be able to buy Newt Scamander’s wand. So as sad as I am to say it, Disney 1, Universal 0 on this one.