Diagon Alley has many great things in it, and it is not without its secrets.  There are a lot of them, and instead of writing posts for each one I thought I would do a quick summary of some of the cool ones.

Hidden  Spells
As I mentioned when I blogged about Interactive Wands, there are actually two secret interactive spells in Diagon Alley that are not on the map. The first is at the Apothecary on the main strip in front of the Gringott’s dragon. You will find in the window what looks like a stump, pointing at the stump make a capital H motion and eventually the stump will move up and down. The second secret spell location is in the window outside Scribbulus. You will find a parchment, and if you make a backwards circle, or triangle, motion writing will appear on the parchment.

Nagini
Down an alley that is on the side of the creature shop, is a large window.  And in this window is a very large animated snake, which is of course Nagini.  If you stay long enough you will hear Nagini speak parseltongue.  This is not something you will find if you don’t venture down the alley, or do the back of the store in the creature shop. 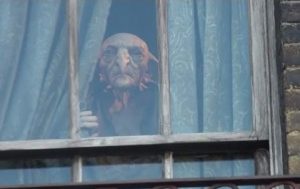 Outside of Diagon Alley is the London front, and on the ride side (if you are facing it) is a set of townhouses.  One of them is darker than the others.  That is because it is 12 Grimmauld Place, which was the home of Sirius Black.  If you look at the windows above the door, every few minutes you will see Kreacher, the Black’s house elf, open the curtains and look outside.  This is one of those effects, that if you are not looking for it, you will miss it completely.

Shrunken Heads
In Knockturn Alley there is a window of shrunken heads that sing, and talk, and are loud and annoying.  This is a spell location, and when you do the spell you make them stop talking.  But one of the songs they sing is worth noting.  Every once in a while you will hear them sing the song from Jaws, “Show me the way to go home”.  This was done on purpose as an homage to the Jaws ride that existed there before it was torn down and Diagon Alley was built in its place.

Phone Booth
In front of the entrance of Diagon Alley in London is a phone booth.  If you go into it and dial M-A-G-I-C (6-2-4-4-2) on the rotary dial, you will get a message from the Ministry of Magic.  Make sure to turn the rotary dial, I know this is very retro and it may have been several years since you used one, but remember, the dial is turned, not touched.

Borgin & Burkes
Inside Knockturn Alley is the store of Borgin & Burkes, your shopping location for all of your dark magic needs.  But there are a couple of hidden gems inside the shop itself.  The first, you will notice the vanishing cabinet at the front of the store, if you listen you will hear a bird chirping.  Just like the one used to mend the vanishing cabinets in the Half Blood Prince.  Also inside the shop you will see in the glass case the Hand of Glory.  If you remember it was this hand that grabbed Harry when he was inside Borgin & Burkes in the Chamber of Secrets.  If you move your hand around in front of it, the hand will grab at you.  But don’t worry, it is inside a glass case.

So make sure when you are wandering around Diagon Alley to keep your eyes out, as there are many secrets and things that can be easily overlooked.  While I have found some of them, I am sure there are more out there, and even more still to come.