Much like Hogsmeade, Diagon Alley also has two Harry Potter inspired shows that you can see on stage almost hourly. The stage is located in the back next to the Hopping Pot, under a nicely shaded roof. Stopping for a show is an awesome break from the otherwise hot and crazy day of Orlando.

The first I want to talk about is Celestina Warbeck and The Banshees. This is a live singing group that will come on stage and sing some great wizarding songs. You may not recognize her as she was mentioned only once in the books by Mrs. Weasley as being her favorite singer.  During the show they even bring someone on stage for one of the songs. This has happened to me once, and there is video of it, sadly which will not be posted to this blog. The songs are catchy and done in a 1920s kind of style. So if you are around and hear the announcement that they are going to perform, it is definitely worth stopping to see this act.

The other performance that they do is The Three Brothers from Tales of Beedle the Bard. In which a group of actors come on stage and tell the story using different puppets. Beyond the amazing effects they manage to do with the puppets, is also their dedication that this is a wizarding show. Even when the actors setup the stage you will see them use their wands to bring forth, or put different things away. This is subtle, but keep you eyes open for it, as it definitely makes the performance that much more magical. I have heard of them doing other stories from Tales of Beedle the Bard, such as the Fountain of Fare Fortune, but sadly have not caught them as of yet. This is another show that is worth taking a break from the day to enjoy. 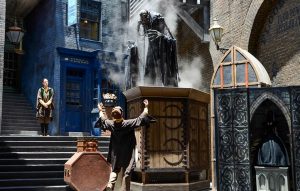