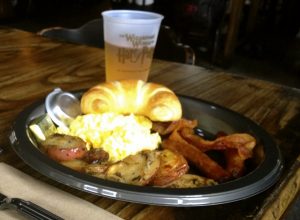 As I said earlier Going Early is key to getting a start on your day at Universal. And if you happen to quality for Early Park Admission, even better. But if you are in a hurry to get to the parks, you may not think about breakfast. Well there is an option for you, if you are willing to give up some of that early start time.

In either of the Harry Potter Parks you will find a restaurant, The Three Broomsticks in Hogsmeade or The Leaky Cauldron in Diagon Alley, but what most people don’t realize is that these places serve breakfast. While this is more intended for people with Early Park Admission, they do serve well past when the park opens and allow walk-ins from people passing by. We have found this very useful when we were in not such a hurry. And there is something magical about starting the day in a Harry Potter setting, sipping your coffee as you watch the muggles outside running to get to the rides as soon as possible.

The menu is the same at both parks, and while the prices are at a theme park level, they are not too bad. All breakfasts are served with a small beverage, but you can order one of the Wizarding drinks for an extra cost.  The food is actually pretty decent, and I have even found myself more partial to their breakfast menu than their lunch menu.

So if you happen to be hungry when you start your day off in one of the Harry Potter parks, maybe take the time and enjoy breakfast before heading out into the crowds.