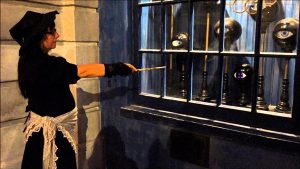 One of the coolest features they have added to the Wizarding World of Harry Potter are the interactive wands. When you stop at a wand shop you can buy a collector version of most of the characters wands, but you can also buy an interactive wand. The interactive wands are a bit more expensive, roughly $50 vs the $40 for the collector wands, and feature a light bulb at the end of the wand. 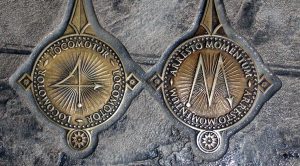 Once you have an interactive wand you can now do the spells located throughout Diagon Alley, Knockturn Alley, and Hogsmeade. Each wand comes with a map showing you where the spells are located, but you don’t really need it as all the spells are marked on the ground with the motion and name of the spell you need.

If you are having trouble with the spells watching for the red cameras in the windows to help get an idea of where to point your wand. There are also witches and wizards walking around that will assist you if needed (and sometimes when not needed).

Note that in addition to what is listed on the ground, and on the maps we have found two hidden spells in Diagon Alley. The first is at the Apothecary on the main strip in front of the Gringott’s dragon. You will find in the window what looks like a stump, pointing at the stump make a capital H motion and eventually the stump will move up and down. The second secret spell location is in the window outside Scribbulus. You will find a parchment, and if you make a backwards circle, or triangle, motion writing will appear on the parchment.

So if you truly want to get immersive and feel like a witch or wizard, I highly recommend spending the money for an interactive wand. Just make sure to mind the end with the light bulb as they can sometimes break, but most of the shops I have seen are really good about replacing the wand.

As cool as the wands are, they will only work in the park. The reason is the wands are just IR reflectors that bounce the signal off the camera and back to it. So unless you create a very expensive rig with an arduino, wii remote, and a computer program, you will not get the wands to work at home.

However if you are like me and really want to feel the experience at home, you can get a Magic Wand – Programmable TV Remote, that will allow you to program 13 motions into the wand for remote functions.  Add to this some remote control LED candles and you have a quick spell effect at home. Or you can just use it to control your muggle television too.