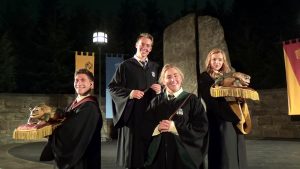 As you walk through Hogsmeade on your way to the Hogwarts Castle, you may miss the stage. On this stage throughout the day there are two Harry Potter inspired shows that will play by actual actors and singers.

The first one is the Frog Choir, which features singers from each one of the four houses, along with a conductor, that will come out and sing some of the famous Harry Potter songs and music acapella style. And of course you have two frogs on pillows that provide backup bass during the performance. 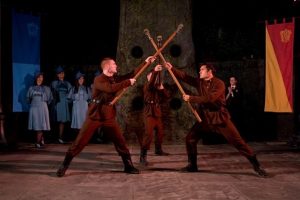 The other show is called the Spirit Rally where the students of Beauxbatons and Durmstrang come out and will perform the dance numbers as they did in the beginning of Goblet of Fire.

After each performance stick around as the actors and singers will pose with people for pictures. So if you want to get that close of picture of you and one of the frogs from the Frog Choir, don’t run off just yet.