With all the work I do with local libraries in the area, it is hard not to think of ways they too can embrace the raging trend that is Pokémon GO. If you are not sure what Pokémon GO is, it is a mobile app that you can run on your smartphone that allows you to catch Pokémon all over the place. It is a good example of augmented reality, where the game is played on a map of real locations. In the game there are also things called Pokéstops, these are landmarks that players and use to get treasure. There are also locations called arenas, where Pokémon trainers can battle and earn arena badges. But enough about the game, let’s look at how a library could do different things with Pokémon GO.

Pokémon Display
If you are in a library, chances are you already have some Pokémon books, DVDs, and some of their movies. Make a display of these, as people are on the look out for Pokémon. Whether they are playing the game, or have only just heard of the term Pokémon, this can give them a chance to learn more about the craze that is going on.

Promote Your Pokéstop
Chances are if you are a library, you are at least a Pokéstop, or maybe even a game arena.  If you are a Pokéstop, promote this on social media, your website, even put some signs up at the library.  If a Pokémon GO player happens to see this, they will probably stop by to get the treasure from the Pokéstop, and come into the library. 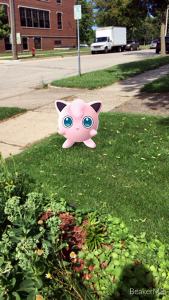 As this is a game of augmented reality, when you catch a Pokémon the game uses the smartphone’s camera for the background. Allowing you to take a picture of the Pokémon in a real life background, such as the photo here. Using this, you could have patrons send you their photos for you to share on social media. Or you could run a photo contest where the best Pokémon photo taken in, or around the library wins. People can get very creative positioning their Pokémon in the photo background.

Pokémon Bingo
If you Google Pokémon Bingo, you will find several, already created, Bingo sheets. Print these out and let Pokémon players take them home for maybe a week to cross off the Pokémon they have caught. If they get a Bingo, have them bring the sheet back. Then you can look at their Pokémon collection on their smartphone to verify they do have all the Pokémon needed for them to get their Bingo. 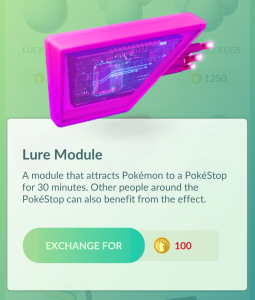 Chances are if you are a library, your location is a Pokéstop. Inside the game there is an item called a Lure Module. If you have been playing for a while, you may already have one, otherwise you can buy one in the game for a dollar. Basically this item gets put on a Pokéstop in the game, which makes the Pokéstop start emitting pink flowers. This attracts Pokémon to it for the next 30 minutes. As this is applied to a Pokéstop, any players in the area will have a chance to catch the Pokémon attracted to this. You can easily set a time and date, and let Pokémon GO players know you will be activating the Lure Module. Or do this as part of another program, or Pokémon related program you are running at your library.

Pokémon Battles
In a later update, it is rumored that they will allow Pokémon GO players the ability to battle each other.  Once this update comes out, holding a Pokémon GO battle tournament at your library would make for a fun, and easy program.

These are just a few of the ideas I have had, and I am sure there are many, many more that you could come up with.  Hopefully this can give you a start on promoting Pokémon GO and taking advantage of this trend to get more people to come into the library, even if it is just to catch a Pokemon.

If you haven’t already done so, download Pokémon GO for Apple iOS or Google Android and see what all the buzz is about.