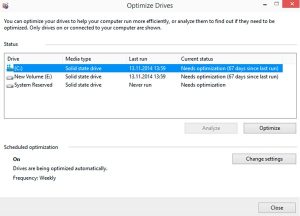 With the release of Windows 10 there have been a lot of things going around the internet on how to fix this, or tweak that.  So far I have found Windows 10 really nice, and after figuring out some of its settings, find I like it even more.

However I ran into an issue upgrading a Windows 7 desktop to Windows 10.  After the upgrade I could not defrag / optimize the drives in the desktop.  They were all showing up as solid state drives, and hence preventing me from defragging them.  I searched the internet for hours, until I finally found the answer.  So if you run into this issue, here is the fix that worked for me.

What this command does is force Windows to re-scan and assess your hardware.  Once it realizes the speed of your drives, it should figure out that they are indeed NOT solid state drives.  However if Microsoft would like to send me some solid state drives, I would be perfectly happy with that answer as well.