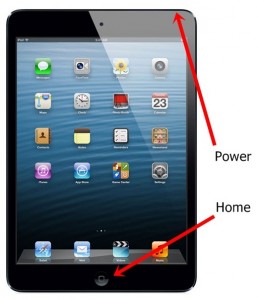 Sometimes a computer gets stuck, this is very common in Windows machines, and when they do typically you just hold the power button in until the machine shuts off. Once it is off you can turn it back on and usually that clears the issue. But what do you do when this happens on an iPad or other iOS device?

Well there is a way to force a reboot or reset of an iPad. If your iPad gets stuck and is unresponsive, you can hold down the Power and Home buttons at the same time until the iPad turns itself off. This typically takes a few seconds of holding both buttons in. Once it is off you can turn it back on and hopefully this will have cleared the issue.

If this did not clear the issue, we will talk about another step you can try called Recovery Mode that I will be doing in a future blog post.