Apple announced that later this fall they will release iOS 7 for their mobile devices. iOS 7 will bring a lot of new changes, including an overall of the iOS interface. But there will be some other changes beyond that, so let’s take a quick peak at what they have announced. 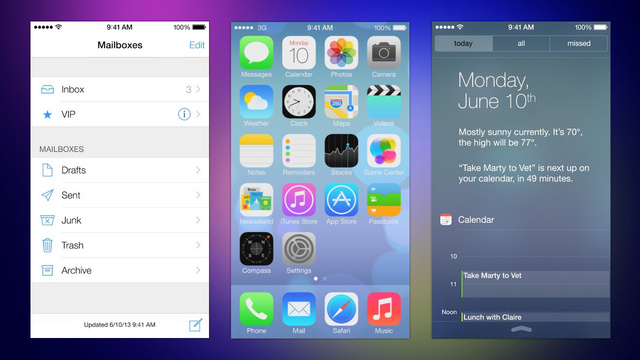 First, as I said there will be a big change to the iOS interface, which includes changing the icons in favor of flatter colored icons, as you can see in the picture of this post. Also a lot of our favorite core apps, such as Calendar, Messages, Mail, and Weather have also been overhauled to match this new interface.

iOS 7 will also add in a new feature called Control Center, that is basically a toggle bar that lets you change basic settings of your iOS device, such as brightness, bluetooth, do not disturb, etc. They will even add in a basic flashlight into the core iOS, which so far people have had to download apps to use as a flashlight.

A new feature called AirDrop will allow supported apps to share files to other iPhones, email, social networks, and even over WiFi. But the functionality of this depends upon the supported app.

Camera and Photos is also being redesigned to allow for square, widescreen picture settings. The Photo app is also being given a lot of additional photo filters. Photo sharing is also getting updated, allowing for new organization and sharing of photo streams within iCloud. This will allow shared pictures with friends where anyone can upload and make comments on the pictures.

Another big change is coming to Siri, who will have the option to have either a male or female voice. Additional voice commands will be added which will include things like “increase brightness”. Other services will be integrated with siri, such as Twitter and Bing.

iTunes Radio is a new feature coming to the Music app, that will allow you to stream your music within iTunes, similar to Pandora or Spotify. It will also integrate into AppleTV as well. The service is free and will have ads, but there will be an option to remove the ads if you are an iTunes Match subscriber.

One of the greatest features that Apple has for iOS is Find My iPhone, which will get a new function called Activation Lock. what this means is that if your iOS devices gets stolen, you will now have the ability to lock it out so it cannot be re-activated without your iTunes password.

Even with those mentioned, there are still a lot of other features comingout in iOS 7. Right now iOS 7 will be available for the iPhone 4 and above, the iPad mini, and iPad 2 and above. More information can be found on Apple’s website for iOS 7.