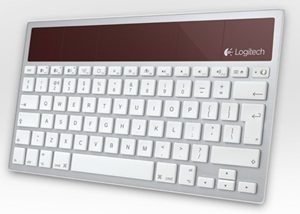 I have been going back and forth for quite a while on getting a keyboard for my iPad. Mostly so that I could use it for blogging an taking notes, but I had some specific things I was looking for. I found that iPad keyboards, are a lot like iPads, or mobile devices for that matter, they are very subjective devices. After much searching and weighing of options, the keyboard I ended up going with was the Logitech Wireless Solar Keyboard K760. But let’s take a look at some of the things I was looking for.

The first thing I wanted to avoid was keyboards that were integrated into a case. Integrating them into a case is really nice to make them portable, but I did not want one as I also use my iPad as my e-reader and wanted the flexibility of having a tablet. My concerns was that I would always have to be taking the iPad in and out of the case to get away from the keyboard. I knew getting a keyboard for my iPad was going to be a “sometimes” item and not one I used regularly. So an external keyboard was what I was really looking for. As I said, this was for my needs, you needs and use may be very different than mine and an integrated keyboard case may be just what you are looking for.

As I said earlier, a keyboard for my iPad would be a “sometimes” device, and not something that I would use regularly. This meant that batteries and battery power were a concern of mine. I wanted the keyboard to be something I could grab and go with, without having to remember to charge it the night before, or having to put batteries in it like it was a slot machine at a casino. This is probably the singular most reason I was drawn to the Logitech K760 keyboard, because as it says, it is solar powered. This meant I could charge it off the lights in a room, as it did say it works with indoor lighting. And it even charges during use, which means I do not have to remember to plug it in the night before I want to use it. And I can say, after using it steadily I have not run into any battery issues.

Another feature of the Logitech K760 keyboard that I liked, but was not necessarily looking for, is that it has three bluetooth connection buttons. This means it can sync to three different devices and can easily switch between them with a touch of a button. This was a lot of fun when I had my iPad, iPhone, and computer all out and was using the keyboard for all of them. It literally was one keyboard to rule them all.

The only real downside I have to say is that it is a little bigger than some of the other keyboards. Don’t get me wrong, it is not a full sized keyboard and is only eleven inches long, but some of the others are shorter. I have not found this to be much of a problem, but others might. And it comes with a pretty big price tag of $80, but you can find cheaper options for the same keyboard on Amazon.

So if you are looking for a keyboard for your iPad or other mobile device, keep in mind how you want to use it and what your needs are before even looking at them. It is all too easy to get distracted by shiny things when shopping for technology, and you could end up spending a lot of money on something you will later come to loathe.