Today was Day 10 and honestly nothing happened for most of the day. One of my coworkers brought me a mocha and I suspected him, but no it wasn’t him. Another gave me an iTunes gift card, nope not her either. When I went to leave I got paranoid and thought maybe they did something to my truck, nope truck was fine.

So I got home and Jill and I went over to Tim & Jackie’s as we had planned to help them wall mount their flat panel TV tonight. When we got there I discovered that Day 10 was their day. They took Jill and I out to eat at Five Guys Burgers, which was pretty good. When they first opened they said their burgers were better than Newt’s here in town. Now I must say that, no this is not the case at all. Newt’s has more specialty burgers and a much nicer atmosphere than Five Guys, but the burger was good anyways. 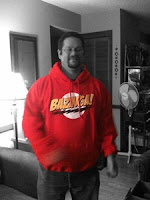 Tim and Jackie also got me a Bazinga sweatshirt from one of our favorite shows, The Big Bang Theory. And a device I have thought of before called the Annoy-a-Tron, which makes annoying noises to mess with your friends and coworkers.

We got their TV mounted after dinner and it looks awesome, and then we got some peanut butter silk pie, which was a great end to the day. I am very tired and we are heading to the Mall of America to hang with our other friends Derek and Kelly. So thank you Tim and Jackie for an awesome evening and making Day 10 so much fun. Enjoy your wall mounted TV, it looks awesome!