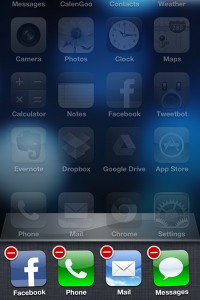 If you own an iPhone, iPad, or iPod touch, you may encounter problems with your apps from time to time. Usually power cycling the device works, but somethings it doesn’t and the app gets stuck. Or you may notice your battery getting drained a lot quicker than usual. The reason is when you open apps on an iOS device, then close them they do not really close. They are still running in the background in case you want to hit the main button twice to use the multitasking feature.

So if clicking the main button doesn’t close the app, how can you close an app for real? It is really quite simple, just click the main button twice to get into the multitasking screen as I indicated above. Now touch one of the apps and hold your finger on it until the apps in the multitask screen start to wiggle, just like if you were going to move them. When they do this a red minus sign appears on them as in the picture. Simply click the red minus signs to close the apps, this will not remove the app, nor will you lose any data in it. It simple closes the app from running in the background.

I would recommend doing this periodically as it will not only free up valuable memory and resources for your iOS device, but will help keep your apps running a lot more smoothly and give you a longer battery life as well. And don’t forget to pass this on, it is one of those hidden abilities of the iOS that not a lot of people seem to know about. I know I get asked this question a lot, and it always amazes me how many people don’t know this trick yet.