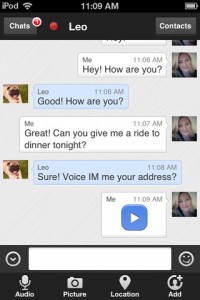 For a while now I have been using IM+ to do instant messaging on my iPhone and iPad. It has worked really well, but recently I discovered another universal instant messaging app called IMO. Basically it does everything IM+ does, allowing you to connect to multiple different instant messaging networks, such as Yahoo, MSN, Google Talk, and many more. But what I liked about it was the interface. The interface of IMO is a lot more intuitive and simplier than IM+. One of the reasons I did not do more instant messaging on my iPhone or iPad was mostly the interface of IM+. It worked just fine, but I found navigation could get a little confusing. IMO’s interface is much more like the built in messaging app of the iPhone or iPad. Navigation from chat windows, and into accounts and settings is also much more intuitive than IM+.

Beyond the interface of IMO, the price was also a big factor for me. While IM+ does have a free version, it has ads in it and if you want to get rid of them, it will cost you about $10 to upgrade to IM+ Pro. IMO is free at this point, and I have seen no ads in the app yet, so price and being ads-free is definitely a win for IMO over IM+.

So if you are looking for a nice, intuitive instant messaging client for your iOS device, I would highly recommend IMO. You cannot beat the price, and the app is very simple to use. Making this app a clear win in my book.