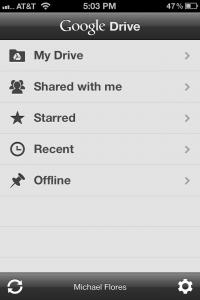 A while ago I wrote a blog post about Google Drive, which is basically Google’s version of Dropbox, but also integrates your Google Docs. Yesterday Google released their Google Drive App for iOS devices, such as iPhones and iPads. I have to say the interface is nice and sleek. The app itself looks a lot like the Dropbox app for iOS, but it does provide easy and fast access to my Google Docs. One of the nice features of the Google Drive app is it allows me to mark some files so I can access them offline. This is very useful for me when I am in Best Buy and need to check my DVD lists. I am impressed with the speed that it can open and access my Google Docs. It exceeds a lot of others apps and methods I have used for accessing my Google Docs from my iPhone or iPad.

In my previous post on Google Drive, the one thing I really wanted was the ability to edit my Google Docs from my iPhone or iPad. I have not found a good app for this as of yet. A lot of them simply show me my Google Docs, or when I edit them they open up Safari, which already has limited Google Doc editing ability. Some of the others, such as Office2 allow me to edit them, but when I save them they destroy the formatting in my Google Docs, forcing me to pretty much delete the doc and start over. I was really excited about the Google Drive app, hoping Google would integrate this into their app, but sadly that is not the case.

Even with all that said I find the app very sleek and elegant. It does give me access to my Google Docs a lot faster and easier than any of the other apps, and I do like the Offline access feature. This is still no where near enough to make me give up my Dropbox, or even install the Google Drive client on my Windows computers. I like having my Google Drive online in the web interface, where I can edit and use my Google Docs like normal. So all in all a good app for Google Drive, and I would definitely suggest people download and use it. Hopefully in a future release they add in the ability to edit Google Docs, I know I will be looking forward to that.