One Browser to Rule Them All

Today Google Chrome threw its hat into the ring of Apple, and released an app version of their browser for iOS. Already one of the greater browsers currently out there, Google Chrome allows you to sync your bookmarks, history, and passwords to your Google account, and across all of your devices. Releasing the iOS app, brings that same functionality to your iPhone or iPad. 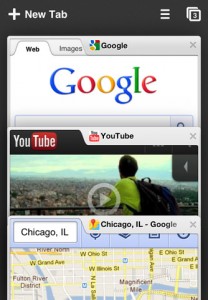 A while ago I wrote about switching to Chrome in a previous blog post, Google Chrome. One of the main reasons I did was because I was tired of the upgrade and bugs associated with Firefox. Do not get me wrong, Firefox is a great browser, and people should use it, but I found Chrome to be more polished. After switching I really liked the ability to sync across devices, literally having one browser on multiple systems. I know Firefox can do this as well, and I tried to set it up and found it was extremely complicated, and well they do not have an app for the iOS. But thanks to Chrome, that sync functionality is brought to my iPhone and iPad.

The speed of the Chrome was one thing I also liked, and the app didn’t disappoint in this department either. My web pages load just as fast, if not faster that Safari did. The interface is also a lot more streamlined. The way they layed out the tabs on the iPad makes it look like the traditional Chrome interface. And on the iPhone instead of having multiple pages like in Safari, it an tile your tabs vertically.

Chrome also has the ability to do an Incognito Mode, which keeps any history ok cookies from being saved in your browser. This feature is also brought to the Chrome app. You can open an Incognito window in Chrome, and keep any history or cookies from being saved. This is useful if you are unsure about the website, or just want to make sure nothing is kept on your system.

One of the nice features of the app is it lets you see your other devices that are syncing with Google Chrome. And it will even show you what web pages you had open the last time you were on it. This is a great feature if you had an article open at work, and wanted to finish reading it at home. No need to bother with a bookmark, thanks go Chrome. Just pick it up off your computer and keep reading it.

A couple of drawbacks though. One of the first questions people asked me is, will is support flash? The answer is no, as much power as Google has over the world, it is not strong enough to force Apple to allow flash on their products. Another thing I have noticed, it does seem a bit heavy on my battery, but that may not be the app, it could be me not being able to stop checking out all the cool features of the Chrome app. Another drawback is that it is not the default browser on my iOS device. That means scans with QR codes, or other apps that open a browser page will most likely use Safari, and not Chrome. Believe me if there was a way to change this, I would.