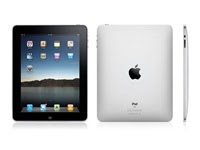 A lot of people have been asking me what I think if the Apple iPad, so I thought this would probably be a good blog post. The Apple iPad is very cool when you first see it. It basically acts as a giant iPod Touch. I think it is great as it has access to the App Store and it does making reading books and doing some of the tasks on it much easier than the iPod Touch since it has the bigger screen.

However, it also has all the limitations of the iPod Touch or iPhone. The biggest one that I am going to discuss, and is my biggest hang up, is the fact it does not support Adobe Flash. Now on a cell phone or MP3 player I can understand this limitation, after all these devices were never meant to be full blown laptops or netbooks. However, now that they have made the iPad, which is supposed to compete with the netbooks, I think this is a major failing. There was a letter that Steve Jobs wrote explaining why he didn’t want to support Adobe Flash. A few of his key points was he wanted the internet to start using different standards, such as HTML5, and to move away from Adobe Flash. He even called Adobe too proprietary, which I personally find hilarious and hypocritical coming from Steve Jobs. While I agree it would be cool if the internet changed and moved to different standards and relied less on Adobe Flash, the reality is that Adobe Flash is here and is what is out there. To sum it up, the end user when they get home with their new iPad are going to want to go on to Facebook and play their Farmville or Mob Wars games. Not supporting Flash on a device that is supposed to compete with a regular computer, is a major downfall. And for the cost of the iPad, you could save yourself a lot of money and get a netbook running either Windows or Linux that will allow you to do your Facebook games and watch Hulu.

I think the iPad is a great device that will show us of things yet to come, but due to Apples shortcomings, it isn’t quite there yet. I know I will be keeping my eyes open to see if the iPad gets improved, or if another device comes out like it. Maybe a Google Android device similar to the iPad perhaps?