While I have blogged about Google+ before, I want to take a look at one of the features of Google+ called Google Hangouts. Basically Google Hangouts is a free, online video chat service that lets you chat with your other Google+ friends. This isn’t too exciting though with services out there like Skype and Facetime. But Google+ allows you to create hangouts and video chat with more than one person at a time. This allows you to have an online meeting with several different people where you can all see and talk to each other at once. When I first tried Google Hangouts there were four of us talking to each other at once. 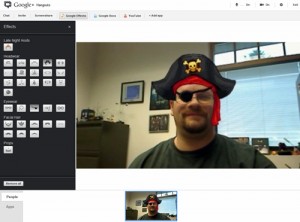 But the potential for Google Hangouts doesn’t stop there. Built into it are options to do video effects on yourself. Such as adding in devil horns or pirate hats for fun. There is also an option that instead of showing everyone your face, you can share your desktop with them. That feature alone moves Google Hangouts from a fun tool, to now a very useful business tool. Because it lets you share your screen so everyone else can view a document and work on it collaboratively. Beyond sharing your desktop, Google Hangouts also lets you share Google Docs to your screen as well, in case your documents are in there. However, the people attending need to have permission in order to see the document in Google Docs.

While all this is great and it has definitely beaten Skype for me, what about using Google Hangouts on a mobile device? One of the major reasons I like the Apple devices so much is the ability to do Facetime. Well Google has thought of that too. Once you have a Google+ account you can download the Google+ App and sign in with your. Using that app, if someone invites you to a Google Hangout you can accept it and join from your iPad or iPhone. You will then be put into a video chat, very similar to Facetime, except with more people. On the iPad or iPhone it can get a little distracting as you cannot see all the members faces at one time like in the desktop version, and it will switch focus to whoever is talking. One way around that if you want to focus on someone, is touch their profile picture in the app and choose the push pin icon, to pin them to your main focus. So again, my hats off to Google as now they have done something Apple hasn’t, they have gone cross platform with their video chat. For example, when I tried out Google Hangouts, some of us were on desktops and some of us were on iPhones and iPads. In the chat, you couldn’t tell the difference very much at all. But the mobile app is not without its drawbacks, as you do not have access to some of the more advanced features such as effects, or desktop sharing. You are literally only capable of joining and participating in the video chat. In fact you cannot even start a Google Hangout from a mobile device, someone on a computer must start one first and invite you to it. Once they have invited you, you have to go into the notifications area to find the invite and join, which can be a little confusing the first time.

The one thing we noticed when my friends and I tried Google Hangouts, was that it is not compatible with all the browsers. We found that it did not work well with Firefox, surprisingly, but it was just fine with Chrome and Internet Explorer. Looking online I discovered there are known issues when using Firefox or Safari, so be aware of those if you try Google Hangouts.

So if you are looking for a nice online meeting tool, you may want to give Google Hangouts a try. It is very cross platform as it works on all the major platforms, and on mobile devices. So while I was not thrilled about Google+ and having yet another social network to maintain, Google Hangouts may be that little extra something that makes the extra work worth while.