Another very addictive game I have found for the iPhone and iPad is Battleheart. Battleheart merges two of my favorite older games such as the original Final Fantasy and the old computer game Baldur’s Gate. You create a group of adventurers, loosely based on a Dungeons and Dragons theme. You can have up to four adventurers in your group at one time, but there is a section called Keep, this allows you to swap different players after buying them. One of the fun elements of this game is actually the graphics. The characters are all drawn very cartoon-like, which for me makes the game just a little more fun and comical. 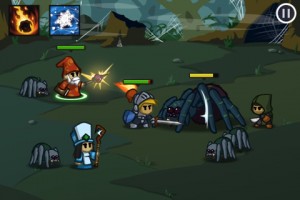 In the game you can direct the adventurers to attack different things, cast spells at different monsters, and heal different characters. All of this depends on what kinds of adventurers you have in your party. Basically you go through each level killing all the monsters, you will then get experience and an item. After the level you can use the Merchant area to buy and sell your items. There is also an Armory section that allows you to swap items and equip your characters with different items and weapons. The other section is the Academy, this is where your characters learn different spells and abilities as they level. So after each character levels up, check in here to see if another ability has been unlocked.

I have to say this game is even more addicting than Jetpack Joyride. And be warned, the app itself costs $2.99, however I have already gotten my money’s worth out of it. So if you are looking for a good, simple D&D like game, I would go buy Battleheart, you won’t be disappointed. Unless you are disappointed with the amount of time you waste playing this game.