One of the most addicting games that I have found so far in the Apple App Store, has to be Jetpack Joyride. In this game you get a jet pack and fly around obstacles, collecting coins and trying to stay alive as long as you can. There are also missions that you get to do in the game, such as avoid five missiles. You can level up, and collect as many coins as you can. With those coins you can buy power ups, new jet packs, all kinds of things. 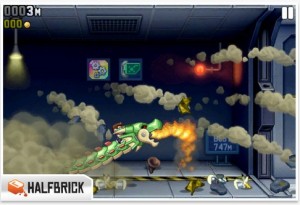 But you are not limited to just your jetpack, in the game there are other vehicles you can use, and purchase power ups for them with your coins. One of my favorites is a giant, flying mechanical dragon that they call, Mr. Cuddles. The game also has flying tokens that you can collect as you go. These tokens allow you to play a slot machine at the end of your game that gives you in game prizes such as more coins, a second chance, etc.

This game has multiple features to keep you addicted. I have to thank my friend Tim for introducing me to this time wasting, battery sucking, addicting game. I have spent countless hours sucked into this game, but have also very much enjoyed it. So look out Angry Birds, here comes Jetpack Joyride!