Ubuntu to the Rescue

As what usually happens when I head to the family’s place on holidays, I work on their computers. My sister has a new Windows 7 HP laptop, but has been having several hardware related problems with it and was not happy about sending it back in. She has a decent Compaq Vista laptop, but that also was having problems. Such as being very slow and not having any battery life. So the question was, what can we do to make the old laptop better for when the new one gets sent away?

Well after some testing it was pretty clear the slowness was being caused by a hard drive problem. No system should take over night to defrag!! So we went to Best Buy and got her a new hard drive, not too difficult. The gotcha we ran into was the fact that she did not have her recovery discs for this Vista laptop with, and I had tried putting XP on it at one point with much pain and suffering due to drivers. So I asked her how she normally uses her computer. She said for Firefox and instant messaging. I suggested we could load it with Ubuntu Linux, as she should be able to do everything she wants with that. She agreed and off we went. 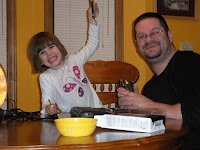 My niece, Lita, was there for Easter as well and helped me replace the hard drive and reload her Mom’s computer with Ubuntu Linux. You can see Lita holding the old hard drive from the laptop in the picture to the right. The laptop is running amazingly fast now, and my sister is very happy with it. She is able to run Firefox and instant messaging with people just as she wanted. She said the user interface is very simple and straight forward. We have yet to really run into a road block for how she uses it. She even told me that she can now get about two hours on her laptop battery where before she was getting almost nothing. Not surprising since Ubuntu uses less resources than Windows.

So even though her new laptop is in the shop, we were able to get her old one up and running with Ubuntu, giving it a second life. Maybe somewhere down the road when she gets her recovery disks, we may reload it with Vista again, but if we do rest assured it will still be a dual boot Ubuntu Linux system.