If you are like me you look forward to shark week, seeing some of the new shows and can’t get enough about sharks.  Most of the shows out there for sharks show them tagging the sharks with satellite tags so that scientists can track their movements, feeding patterns etc.  Wouldn’t it be cool to track them as well and follow along?  well now you can thanks to the Expedition White Shark app in the iTunes App Store.

The app shows a map of some of the sharks they have tagged off the coast of California.  It also shows their known position within the last 7 days as well as information on the shark when they caught and tagged it.  You can also see along the coast locations of where shark attacks have been reported.  It looks to be qui 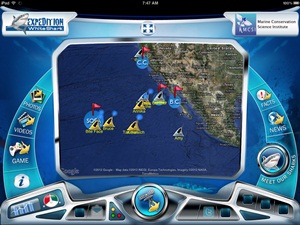 te a bit, but realize this covers a long history as well as the more recent.

So if you like this kinds of programs on the Discovery Channel, or just want to feel like a marine biologist even when you are in Minnesota, now you can with the Expedition White Shark app.  Keep in mind though that as cool as this app is, it is also pricey.  $3.99 may be a bit more than you are willing to pay to see where some sharks were swimming off the coast of California.