Last week I went to Orlando Florida with my wife, my sister, and my brother in law. So on Monday, November ninth we went to the Minneapolis airport to leave. It was interesting as there were several people from the military also flying out. We even took some pictures for a couple that just had a three week old baby before he was being sent off. I think because of this our flight was over booked and they asked for volunteers to give up their seats. We had plenty of time so we volunteered and got put on a direct flight to Orlando arriving only one hour later than planned. For this the airline gave us $1200 in airline vouchers. We had a decent flight to Orlando and when we arrived we went to pick up our bags and found out they were not there. Evidently the flight from Minneapolis was canceled due to mechanical problems, so cool for us. The airline did get our luggage to our resort later that night, so no problems there.

Once we got to Orlando we stayed at our time share resort with Wyndham, which is always fun. It is more like an apartment than a hotel room. The resort has several pools and two lazy rivers, so many of our vacation days included several hours of swimming. We were even able to get discount tickets from our resort for Universal Studios. We paid less than a two day pass, but got a full seven days, which allowed us to come and go as we pleased at Universal. We also got a great deal on a special Disney Christmas Party from our resort too, but I will talk about that more later in this blog post.

At Universal Studios we had a blast. We got to hit all our favorite rides from last time such as the Hulk and the Mummy. The Hulk is a very smooth roller coaster that goes really fast. The Mummy is one of my favorite rides of all time. It is an inside roller coaster that is mostly in the dark, with lots of great effects. There was also a good amount of shopping done at Universal Studios. We all got matching Thing 1 and Thing 2 t-shirts, which was pretty funny. I also found a vendor selling a case for an iPod or iPhone that is rubber and sticks to smooth surfaces, even upside down. I got one for my iPod, but not my iPhone mostly because I wasn’t sure how good it would actually be. Turns out it was great, I had a lot of fun sticking my iPod to all kinds of things, and only regret not getting one for my iPhone. Maybe I will order one off of their website. In case anyone else is interested, here is their website, http://www.iskinzzy.com/. 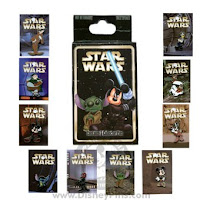 We also spent a lot of time at Downtown Disney, hitting the Candy Cauldron for caramel apples. Now caramel apples doesn’t sound very exciting by itself, but these are granny smith apples, dipped in caramel, then your choice of chocolate, followed by a multitude of toppings that you can pick from. I think we went there two to three times while we were in Orlando. The other thing we found at Downtown Disney were the Disney Star Wars pins. These are pins of Disney characters, but dressed as Star Wars characters. There are two in a box, and they are random, so you are not sure which ones you will get. We did get lucky though and were able to get a few sets without a lot of extra pins. I got lucky on my last box and got the two pins I was missing for my set. We also found a Ghirardelli Chocolate shop there that not only sold chocolate, but mochas and sundaes. Alas, if only there was one near home. 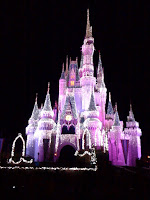 As I mentioned before, we were able to get tickets for a special Christmas Party and Disney’s Magic Kingdom. They let us in the park at 4:00pm and gave us arm bands. At 7:00pm they closed the park and most people had to leave, except for the people attending the Christmas Party. There was a special parade, live shows, and all the free hot cocoa and cookies you could drink and eat. The party when from 7:00pm to midnight, and the other bonus was that all the rides and stores were open. Imagine being able to get on any ride with no line at Disney World. It was awesome and we had a great time. I kept going back for the hot cocoa and almost lost it on Space Mountain, but enjoyed every minute of it anyways. We were not sure how late we would stay, but we stayed until 12:00am as we were having too much fun.

The following day after the Disney Christmas Party we flew home in the morning. It was a bit of a shock to the system going from 80 degrees to 40 degrees. I was so tired by the time we got home, and was severely jet lagged the following day at work. But would do it all over again.