In a previous post I mentioned how to turn a router into an access point.  Going off of this post, let’s talk about how you might use that to create a multi-access point wireless network.  Basically what we are going to do is use one of the routers as a regular normal router, and configure the other two as access points.  We are then going to link them all and create one large wireless network, I like to call this Big Kitty Wifi, and I will explain why later.

First we start off with just a normal router that we configure with an SSID and we setup some kind of security on it, let’s say WPA, so that we have a nice user friendly password.  One thing we want to make sure is to set the router to a specific wireless channel, do not let it use the auto scan capability, set it to say channel 1, and plug into into your cable or DSL modem like normal.

Now, the next part is how to connect the other two routers to link them to the same network.  First you will also want to make sure the access points are some distance away, but can still be plugged in with an ethernet cable to the router.  Make sure to plug the ethernet cable into one of the switch ports, not the internet port.  As for configuring the access points, make sure to give them the same SSID and WPA security as the main router, but again set them to a specific channel.  Do not let them auto scan, usually picking channels 6 and 11 are good for the other two routers as the main router is on channel 1.

Let’s take a look at what we have created, we have created a wireless network with three access points, that overlap each other.  So as you want between them your wireless signal will become weaker, but then it will refresh and hop onto a different access point.  I was skeptical of this at first too, but it does work.  As you can see in the diagram below, each circle represents the range of one of the wireless routers.  Because they are on separate channels, they do not interfere with each other, and will allow your wireless device to move between them. 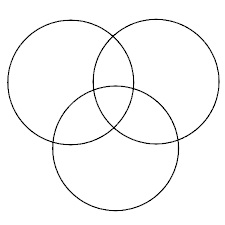 So why do I call this Big Kitty Wifi?  Well when I was taking classes at Cambridge Community College, I would come home from an early math class and watch some television.  However out of the three or four channels we got, not much was on at 9:00am in the morning, except for Lamb Chop’s Play-Along.  And I learned when you have three intersecting circles, such as our three point wireless network, you can add a few lines and you get the picture of a kitty, such as the one below.  And that is why I call it Big Kitty Wifi. 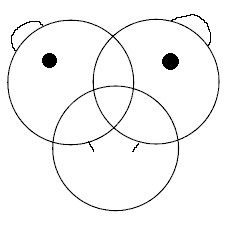