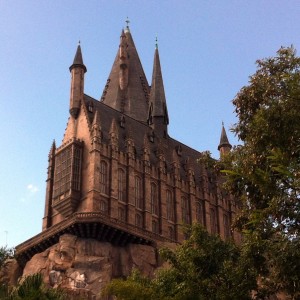 This past week we went to Orlando, Florida with Jill’s sister and her husband.  We had a blast!  Most of our time was spent at Universal Studios.  One of the major new attractions open there was the new Wizarding World of Harry Potter.  This is probably where we spent most of our time.  The ride itself was mind blowing, using a combination of actual moving parts and omni-theater effects.  Then there was the replica village of Hogsmeade.  It was literally like being in one of the Harry Potter movies.  We even got wands at Olivander’s wand shop.  I of course got Snape’s wand to take home.  There were also lines for butterbeer too, in which you could get a souvenir glass.  We did that one a few times, until we found that you could get real beer and sit down inside the Hogs Head Tavern.  Another thing that Universal had that made this a truly Harry Potter vacation, was they still had the last moving playing in the theater at Universal City Walk.  Tony and Jody had not seen it, and we were more than willing to go back.  It was even more exciting as it was in 3D, which is not how Jill and I saw it when it came to theaters.

But Universal wasn’t the only place we went.  There was also a lot of time to spent by the pool.  Downtown Disney is also very close to our resort, so we did a lot of shopping and eating down there.  We were even able to get tickets to the Mickey’s Magical Christmas Party again so that Tony and Jody could get to see the Magic Kingdom at Disney.

It was a truly awesome vacation, and I think much needed amongst all of us.  For tomorrow it is back to work, and our week off comes to a close.