More Than a Dog 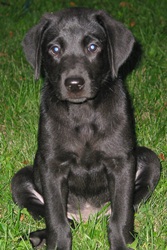 Alexis was born on June 17, 2002 and died on October 7, 2011.  She was nine years old when she died from liver cancer.  And while she was taken from us a little early, her time with us was great.  Most people may not understand this blog post, but people who are pet owners I think will.

The story of Alexis actually starts about a year before she was even born.  My father had passed away from excessive alcohol abuse, and my aunt had moved in to take advantage of the situation.  She had made sure that our family got little to nothing left from our father, and convinced him that we were all against him.  So in short, we lost our family home and our ties to my father as he died.  This left me in a tough spot, and it was really hard to cope with.  I mostly drifted for about a year, never really being myself again.  Even Jill and I were not together at this time as it was just too much, but we remained friends.

Time went on and it was Jill’s birthday, we were kind of back together at that point.  Our friend Sharon for Jill’s birthday had decided to give her a puppy as her cousin had just had a litter of black lab puppies.  Jill was thrilled and I was nervous as puppies are a lot to take care of.  But Jill, being Jill read a ton of books on puppies and started to set ground rules before the puppy was even there.  I warned her though, that is hard to do until you know the personality of the dog.  And the time came and we went and got the puppy.  We picked out our puppy and our friend Sharon took one as well. 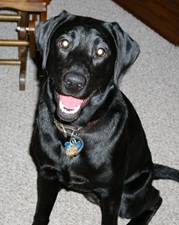 Alexis was named after one of Jill’s role playing characters from a super hero game we were playing.  That was the thought we had, and when we picked her up and looked into her face, she was definitely an Alexis.  We took Alexis out of the litter and she was all snuggly and cute and rode quietly all the way home.  When we got her home we put her on the kitchen floor, as Jill decided to keep her in the kitchen to begin with.  As soon as we put her down she sprang to life.  The mellow puppy we thought we had, was not mellow at all.  Alexis immediately went out beyond the kitchen to explore the house, and very much claimed it as hers.  She didn’t cry or whine because of missing her litter, but because Jill had a rule to keep her in the kennel during the night.  The next few months found Alexis breaking every rule Jill had put in place.  I did not get involved in any of it, but Alexis went down that list of rules like a check list.  One of my favorite examples was the Not on the Furniture” rule.  Alexis had jumped up on the couch and curled up for the first time.  Jill went over to her and told her to get down, Alexis just stared at her with those big brown eyes, and Jill told her again to get down.  Alexis just cocked her head and stared, then Jill said, “Fine” and walked away.  Alexis just laid her head back down and went to sleep, and so being allowed on the furniture was now OK.

As a puppy Alexis was a hellion.  She was very active and loved to play.  When she was young I was actually between contractor jobs at IBM so during the day while Jill was at work, I would stay home with Alexis.  I would play until she slept, and then clean the house, until she woke up.  This allowed us to get through potty training very quickly. However the side effect was, she became what our friend Sharon called a Mikey dog.  She was definitely a daddy’s girl and took on a lot of my personality I think.  As I said earlier, as a puppy she was a hellion, one of her favorite games was to pull the scrunchies out of Jill’s hair, or play tug, or just play.  It wasn’t until we taught her ball, that we were able to reduce the amount of puppy scars on our hands.  She took to ball like crazy, and quickly became obsessed with it.  It was her favorite game, she had even learned when she returned the ball if it wasn’t close enough we could say, “Can’t Reach It” and she would pick it up and drop it a little closer.  None of this was surprising for a lab, nor was it shocking when she took to swimming and playing in the water as well.

Alexis quickly filled out lives and brought us closer together.  As I mentioned earlier, with all the stuff with my Dad I had kind of lost my way.  I now found my focus back, and life made sense again.  All because of this little puppy that I wasn’t sure Jill should be getting.  And so life went on, day to day, with new surprises and demands from Alexis.  For a dog Alexis could speak very good English.  She was very expressive and left little confusion for you when she wanted something.  A lot of people say their pets are like kids, in our case Alexis thought she was a human.  Going to the dog park she didn’t care much for the other dogs, she wanted to play ball.  I have never met a dog smarter than Alexis, nor as manipulative.  If I would tell her no, then she would go beg from Jill.  Even when we asked her for kisses it meant we could give her kisses.  She was very much large and in charge, and had a spark for life very much unmatched. 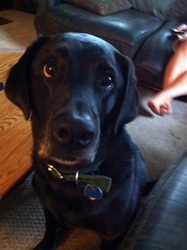 Time went on and eventually we got another dog, Flash.  At first she didn’t like him at all, but he was very mellow and accommodating to Alexis.  A couple of weeks had gone by and I worried if they would get along, it wasn’t until one night when I let them out that they didn’t come back in right away.  I went to check and they were playing, but as soon as Alexis knew I was watching them she stopped and wouldn’t play with him anymore.  I stopped worrying about them at that point.  Alexis and Flash would be secret friends, or so Alexis thought.  Flash was very easy to train because he pretty much did what Alexis did.  So he became the easy dog.  Alexis was still Alexis, and was very demanding.  But she was also very loving when she wanted to be.  I remember one morning she was laying between Jill and I with her head on the pillows and her body under the covers.  Her paws were draped over the edge of the covers, just like a human.

There are so many more stories of Alexis, but alas this is a blog post, not a book.  To us Alexis was more than a dog, she was our child, and she acted that way.  I will miss her dearly, and thank her for coming into my life and putting things right.  If it wasn’t for her I am not sure where my life would have gone.  For those that knew Alexis, they know there was a spark of life and of love in Alexis that was special and rare.  Thank you Alexis for being a part of my life, we will all miss you.  You were a special friend and so much more than just a dog.